At KellyFairtheMentor.com, we had the opportunity to interview two beautiful, influential women–Cameka Smith of BOSS Network and Cynthia Boykin of What You Need Is… We are happy to share with you a combined presentation of their insights and inspirations for mentoring and strengthening community! END_OF_DOCUMENT_TOKEN_TO_BE_REPLACED

Ohio State vs. Michigan; Alabama vs. LSU;  Grambling  vs. Southern University…..Colleges and universities are well known for their rivalries.  If you’ve ever heard the question “Who’s the REAL HU?” it’s referring to the rivalry between Hampton University and my alum, Howard University.  Of course, as a proud Howard alum I confidently claim, like the rest of the world should for that matter, that Howard University is the REAL HU, and not Hampton University!  Howard alum are very helpful and quick to let you know that Hampton University only reached “university status” in 1984 after formerly being known as Hampton Institute. So, how could they ever be considered the real HU?  Although,the rivalry between Howard and Hampton is largely friendly, out of fun, love, camaraderie,  and respect for a fellow historically black college and university….it’s usually pretty difficult to  find a Howardite, such as myself that will have a boatload of positive things to say about Hampton University.  But, in this piece Hampton alumni everywhere need to bask in this rare instance where I’m going to give respects to one of our ancestors who is associated with founding Hampton University.  And, why am I giving her props you may ask?  I can’t think of a greater example in demonstrating the FAITH necessary to support the education and mentoring others in dire circumstances, than the one set by Mary Smith Peake.

I just learned about Mary’s story in the Henry Louis Gates PBS special, “The African Americans: Many Rivers to Cross.”  Mary Smith Peak, (1823-1862), was an American teacher and humanitarian, best known for starting a school for the children of former slaves in the fall of 1861 under what became known as the Emancipation Oak tree in present-day Hampton, Virginia.  Mary was also associated with the founding of Hampton University in 1868. 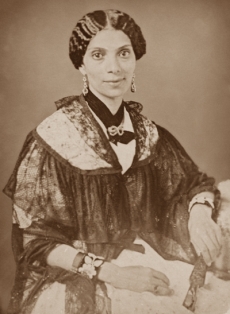 In the show, Gates and fellow researchers discussed how Mary was so passionate about teaching slaves to read.  She believed that liberating the mind was as important as freeing the body.  So, she taught slaves in secret, breaking the law, and conducted the lessons beneath the branches of this oak tree.  Her school grew quickly from a handful of students to 900.  The slaves were just as determined as she was, and wouldn’t let anything stop them from getting the lessons.

But, the question is why did Mary take such a risk? And, why did she take such a risk in 1861, the beginning of the civil war?  At the beginning of the civil war, no one even anticipated that a union victory in the war would lead to the end of slavery.  The war wasn’t even about ending slavery at that point, it was moreso about the economic and political battles between the North and South on cotton production and manufacturing.  So, it wasn’t like Mary was just holding on for four more years, with the assurance that teaching these slaves to read would be in preparation for the end of slavery if the North won in 1865.   No, she was doing this work in the absence of any real guarantees.  She was doing the work based on hope, and based on her FAITH.   Mary and others saw it as an opportunity to use their talents and skills to uplift the community.  She believed that she was preparing the slaves to become full citizens…one day.  She had FAITH that her work in teaching them to read would transform the slaves’ lives, but also go towards changing the fate of the nation.  If that isn’t a great example of FAITH, in absence of any reassurance or evidence, then I don’t know what is.

I’ve often said that being an entrepreneur helps build your FAITH muscles like nothing else.  When it comes to being a social entrepreneur and leader of a non profit organization, I think that statement can be amplified times ten.  I’ve encountered so many challenges in running Polished Pebbles Girls Mentoring Program in the last four years.  It was a huge risk to leave my career in corporate America to pursue my passion.  And, it was such a huge risk to put myself out there and start Polished Pebbles with no real funding, no assurance of the necessary support, or that it would even be successful for that matter.  And quite frankly, it hasn’t gotten any easier to continue to grow our efforts mentoring girls and encouraging our community to do the same.  School and government budget cuts make servicing our communities in the same capacity, or greater, extremely hard.  How do you continue to commit to our girls, their families, our schools, when it’s hard to see how you can continue to commit to paying staff to do the work, and when it seems that the budget to do so is non-existent!

Family and friends know that when I get frustrated with the challenges in growing my organization, I often jokingly ask myself….”Now, why did I leave my job and my salary again?”  But, when I calm down and put things in perspective, I have to say to myself how can I not continue to persevere to be successful with Polished Pebbles even in seemingly dire circumstances such as the times we’re facing now.  I know that it’s been FAITH that’s gotten us this far, and it’ll be that same FAITH that will continue to transform the lives of the girls and communities we serve, and change the fate of education in our nation today.  Yes, I do get scared often, but how can I seriously consider giving up if I consider the life-threatening FAITH that our ancestors like Mary Smith Peake demonstrated to free us!  Just like Mary and her counterparts,  I will continue to see my work with Polished Pebbles as an opportunity to use my talents and skills to uplift the community.  And, just like Mary I must continue to believe that the work I do prepares our girls to fully realize the possibility of happy, successful, and prosperous lives.  And, that is a cause that worthy of the risks.

Want to get more tips and insight on mentoring urban youth and girls? Share and follow,http://www.kellyfairthementor.wordpress.com.  Want to join us with mentoring at Polished Pebbles?  Email us at info@polishedpebbles.